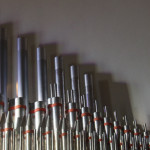 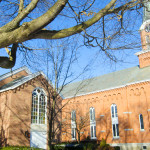 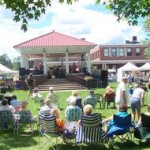 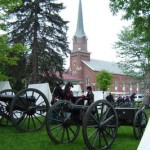 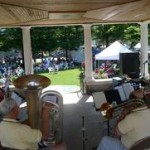 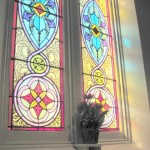 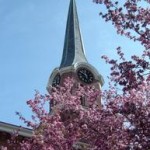 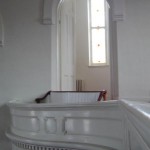 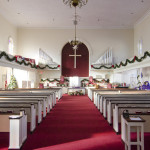 History of Our Church

The First Religious Society in the Town of Homer was organized on September 10, 1799. This independent parish constructed a church building on the northeast corner of the Homer Village Green where on October 12, 1801, the first gathering of the Homer Congregational Church took place.

In 1803, the Church and Society called its first minister, the Reverend Nathan Darrow. During his tenure, the Society was deeded six acres of land that included the Village Green and the land to the north and west of it. A new church was built on the site where the current church stands. In 1843, a sessions house was built beside the church, where Jones Hall now stands. This building was used for forty-five years before it was moved to serve as a house on Cherry Street in Homer, where it still stands.

In 1860, plans for a new church began. The old church was torn down and the present brick church was dedicated in July 1863, four days after the Battle of Gettysburg. The parlors and kitchen were added in 1887. In 1900, the manse at 14 North Main Street was purchased. The organ was installed in 1903 and rebuilt in 1938. The sanctuary has been redecorated or renovated at least eight times since 1863. The most devastating structural event came in 1971 when a fire severely damaged the sanctuary, organ and Russell Fellowship Room. Much of the furnishings and the stained glass windows were saved. The renovated sanctuary was opened for Christmas, 1972. An elevator and handicap ramp were installed at the rear of Jones Hall in 2000.

The Homer Congregational Church has shown visionary leadership in education for the community. It established the first school system in the village, the Homer Academy, in 1819, where many young people were educated who later entered the ministry. In addition, the church provided space in Jones Hall in the 50’s and 60’s for Homer Elementary School. From 2000 to 2012 we operated the Homer Youth Center, an after-school drop in program for middle school and junior high school youth. The church continues to be the site of the Homer Children’s Center’s preschool and Before and After School Program for elementary school children, which began in the mid 1980’s.

When the merger of the Evangelical and Reformed Church and the Congregational Christian Churches was finalized in 1957, forming the United Church of Christ, the Homer Congregational Church became a member of this denomination.

Our congregation has links to the people who founded two colleges which have historic connections to the UCC. Rev. John Keep, pastor of HCC in the 1820’s, left for Ohio and, along with others founded Oberlin College, the first co-ed and multi-racial college in the United States. Pastor Keep was an ardent abolitionist and proponent of equal rights for women. One of his followers in Homer, John Cravath, continued the abolitionist cause in Homer after Keep departed.